You should be watching these five upcoming streamers 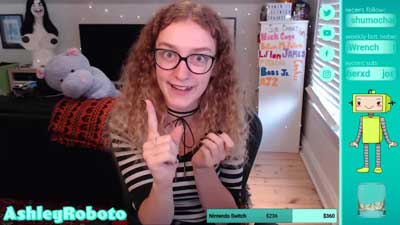 With all the huge names on streaming platforms such as Twitch, it is easy to forget about up and coming streamers.

Faced with such intense competition, it can be argued that it is harder to gain a following as a streamer now than ever before. Therefore, it is quite an accomplishment to stand out and be noticed amongst the already established names.

You may have heard of some of these streamers – through websites such as Livestreamfails or by reading streaming-related news online. If you haven’t, make sure to check them out!

Here are five of the best up and coming streamers:

Many streamers build a following through their funny on-stream moments.

Twitch streamer AshleyRoboto is no exception to this rule and is one of the most original comedic content creators on the platform. Her gaming commentary is engaging, and she constantly looks for ways to entertain her audience – whether it’s making jokes or her reactions to events in the game.

Her video edits are creative, with regular uploads to Twitter for people who may have missed a funny moment in a broadcast.

She is also highly regarded for her witty replies to negative comments. While many streamers take these comments personally, Ashley likes to take a different approach.

Blessed with a vibrant personality, and a unique take on online negativity, AshleyRoboto’s sassy, no-BS attitude is a breath of fresh air for Twitch.

ItsSliker has taken the Twitch community by storm in recent months.

For years, he averaged around 10-20 regular viewers. That is, until he appeared on one of Twitch’s most well-known talk shows: the Rajj Show. From podcasts to dating shows, the show hosts a variety of streamers. Big names such as SodaPoppin, Pokimane, and GreekGodX often make appearances on the show. So do smaller, aspiring content creators.

After appearing on a number of these shows, Sliker amassed a number of clips that went viral on communities such as Livestreamfails.

He became well known for his controversial comments and his outspoken personality. Whilst this initially helped him gain a large number of followers and views, it also resulted in him being refused partnership for months even though he met the requirements in regards to views.

After refining his content and making an effort to be less controversial, he was finally partnered back in February 2020. The growth of his stream is still skyrocketing and doesn’t look to be slowing down any time soon.

He now streams a variety of content including games such as CS:GO as well as IRL and Reddit/video reaction streams.

Yamatosdeath1 is an up and coming League of Legends streamer who is known for his rage moments and loud personality.

He regularly plays and streams with RATIRL, a famous name in the LoL community. Their natural chemistry and back to forth banter with each other makes for hilarious viewing. They are included together in this list as their content and success is largely based on their collaboration.

A lot of big streamers get together and play games for content but a lot of the times it feels forced. With Yamato and RATIRL, the friendship feels very natural and this is entertaining to watch.

Sweet Anita is becoming a well-known name amongst the Twitch community. She suffers from Tourette’s syndrome, which causes her to say numerous explicit and funny phrases at random without her control.

Despite this, Anita has thrived in difficult circumstances and amassed a large following on Twitch. She uses this exposure positively – to spread awareness of the condition.

Her condition has also caused her difficulties in regard to her streaming career. She received a lot of criticism in late 2019 when she uttered a racial remark during a broadcast.

Anyone who followed her stream knew it was not in her control and that it was her condition that caused the outburst. Either way, people were quick to jump on the hate train and called for her to be banned from the platform.

This reinforces the fact that people need to be educated about conditions such as hers – which is exactly what her stream aims to do.

Despite the backlash, Anita remains positive and reaffirms how grateful she is to have the platform to be able to spread awareness to people. She even accepted the apologies of other streamers who wanted her permanently banned on Twitch.

Kate Stark or just Kate on Twitch is making a name for herself in the world of streaming. She is typically a gameplay streamer, occasionally branching out into social or creativity-focused streams.

In January 2016, Kate made a new year’s resolution to become more creative. To start that off, she made her own Twitch channel and has since gained a significant audience.

Kate plays a variety of games for her audience. She has a preference for shooters. More recently, she has been streaming a lot of Modern Warfare and PUBG. She also plays games such as Sea of Thieves and Stardew Valley from time to time.

If you’re looking for a positive, upbeat stream focused on the Battle Royale genre of shooters, Kate is a great streamer to follow.

The streamers in this list have already passed the hardest hurdle, which is getting that initial exposure and following. Ironically, the fewer followers and consistent views you have on Twitch, the harder it is to grow. Still, there could be someone with a handful of viewers that you end up finding more entertaining than someone with thousands.

The bottom line: it is important as a viewer to regularly be on the lookout for new streams and clips in the category of your interest. There will be hidden gems and future upcoming streamers just waiting to be unearthed.